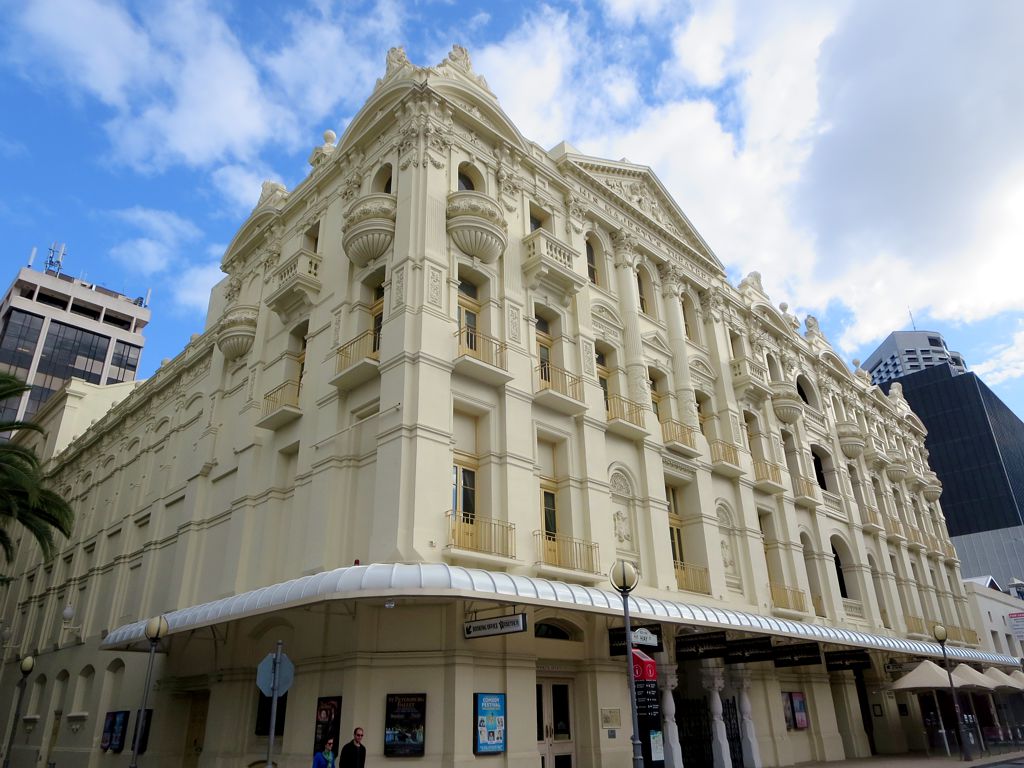 Situated in Perth, His Majesty’s Theatre opened its doors in 1904 and was the largest theater in Australia at the time. Listed as a State Heritage Icon, the theater itself is an exemplary example of fine architecture from the Edwardian era, with one of its most impressive features being its dome roof, which slides open on warm summer evenings to allow a cooling breeze to waft through the 1240-seat theater. With world-class performances of all genres being held here and delicious options for pre-show dining, it is no surprise that His Majesty’s Theatre is one of Perth’s top attractions.

Current and Upcoming Highlights
The program of shows at His Majesty’s Theatre is constantly evolving, with new acts being continuously introduced, keeping the program fresh and current. Beauty and the Beast, presented by the West Australian Ballet and the West Australian Symphony Orchestra, is a classic story, and is brought to life in a new way in this version, but since it is only running until the end of May, you will need to catch a show soon! One extremely highly anticipated show, which will be held on the 15th of June, is Starman – A Show with the Music of David Bowie, showcasing the world of seventies glam-rock.

Downstairs at the Maj
The unique downstairs venue at His Majesty’s Theatre, aptly named Downstairs at the Maj, is an exciting addition to the theater, focussing more on comedy, live music and cabaret acts. Every Friday, Downstairs at the Maj is home to the Comedy Lounge, featuring a select line-up of some of the finest local and international comedians. This June will also see a special showing of Cabaret de Paris – A Burlesque Extravaganza, bringing all of the excitement of Parisian cabaret to the heart of Perth. Downstairs at the Maj is also home to the Museum of Performing Arts, which has over 40,000 pieces of theater memorabilia in total, with revolving exhibitions every six to eight weeks. The exhibition is well worth viewing, as it depicts the way in which the performing arts have contributed to the social and cultural livelihood in Western Australia throughout history.

Pre-Show Dining
Most people choose to make an evening out of a visit to His Majesty’s Theatre, and the pre-show dining menus at the theater’s Barre Lounge Café make this easy. The innovative menus are inspired by the shows that are currently being held at the theater, and make full use of produce that is grown in Western Australia. With dishes such as the Beef Cheek with Potato Mash, Confit of Duck Leg with Braised Lentils, and the Crispy Zucchini Flowers with a Goats Cheese Ravioli, a meal at the Barre Lounge Café is the perfect appetizer to a show at His Majesty’s Theatre.

For those who want to know even more about His Majesty’s Theatre, there are a few different guided tours that you can take, from the Behind the Scenes Tour to the Technical Tour, each sharing exciting secrets and techniques that the theater utilizes. Whether you decide to catch a show or simply drop by to check out the museum and architecture, no visit to Perth is complete without having a look around this magnificent and iconic landmark.