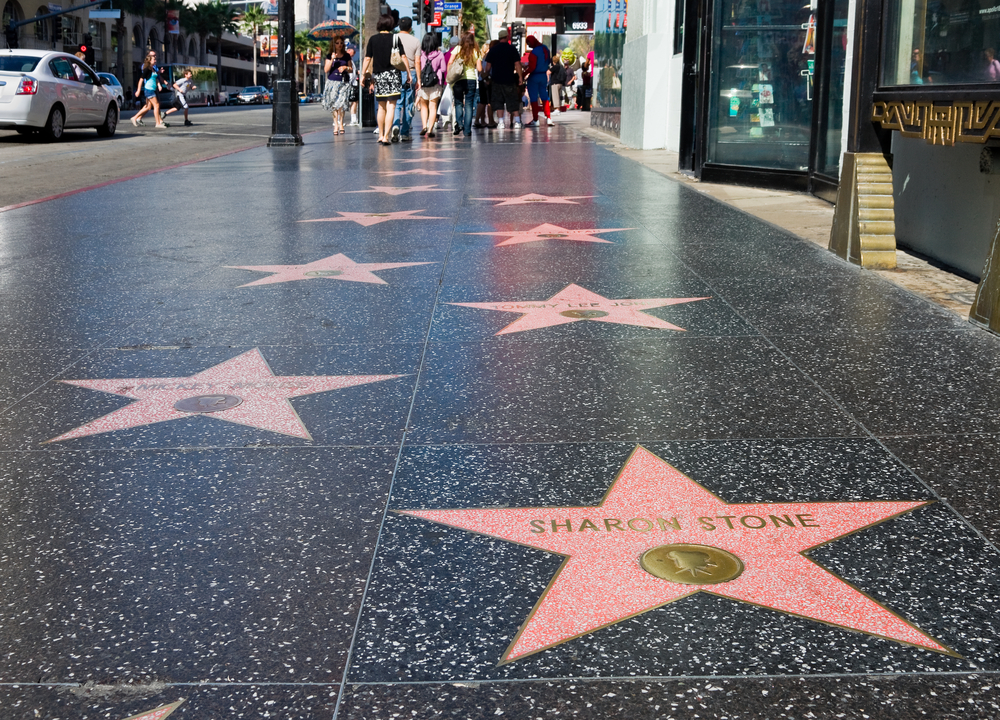 Each year, millions of people visit Hollywood, and the Hollywood Walk of Fame, known all over the world after it was conceived in 1958, is receiving over 10 million visitors annually in itself. Consisting of 15 blocks of Hollywood Boulevard and some of its side streets, measuring three and a half miles in total, the Hollywood Walk of Fame contains over 2,500 terrazzo and brass stars that each represent achievements in the entertainment industry, bearing the names of actors, musicians, directors, producers, fictional characters and more.

Most Visited Stars
While each celebrity represented by a star has their own following of fans, there are, of course, some stars that are much more popular than others. David Bowie and Donald Trump are among these, as are Arnold Schwarzenegger, Michael Jackson, Dolly Parton, John Wayne, Celine Dion and Ronald Reagan.

Special Stars
In addition to the popular celebrity stars, there are also a number of special stars on the Hollywood Walk of Fame, with unique emblems to honor these individuals. Tom Bradley’s star, the former mayor of Los Angeles, displays the Seal of the City, while stars that represent corporations, such as Victoria’s Secret and the Los Angeles Dodgers, display their corporate logo. There are also monuments that honor the Apollo 11 mission to the moon, with four circular moons that bear the names of the three astronauts, as well as the date of the first moon landing.

Celebrities with Multiple Stars
The stars on the Hollywood Walk of Fame are divided into five categories; Motion Pictures, Recording, Radio, Television and Live Theatre. Since certain entertainers have enjoyed achievements in multiple categories, there are multiple stars to represent this. The only celebrity with a star in all five categories is Gene Autry, while celebrities that are represented in four of the five categories include Mickey Rooney, Bob Hope, Tony Martin and Roy Rogers. There are 33 other celebrities that have stars in three categories, including Bing Crosby, Frank Sinatra, and Dean Martin.

Fictional Characters
In 1978, Mickey Mouse became the first fictional character to be awarded a star on the Hollywood Walk of Fame. This opened the doors to other fictional characters being honored, and there are now plenty to be found on the walk. These include Bugs Bunny, Donald Duck, Winnie the Pooh, The Simpsons, Snoopy and Tinker Bell. There are also ten stars representing cartoonists and animators, including Walt Disney, Matt Groening, and Hanna-Barbera.

If you haven’t been able to see some of your favorite stars whilst visiting Hollywood, then the Hollywood Walk of Fame is your next best option. For those of you hoping to hunt down your favorite celebrities’ stars, it is definitely worth mapping out your walk beforehand, as it can often take a while trying to find certain stars when you are actually there.