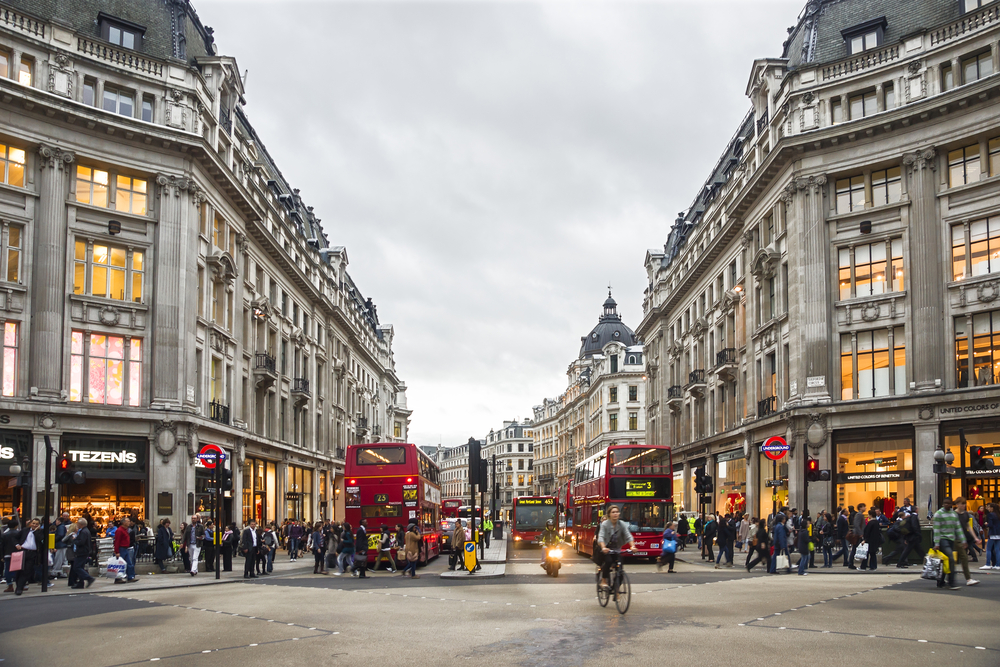 Located in the West End of London, Oxford Street is the busiest shopping street in all of Europe and welcomes around half a million visitors each and every day. While Oxford Street may have faced rising competition over recent years from new expansive shopping centers that have been opening up around the city, it has managed to maintain its reputation as the hottest retail street in the capital. The street itself stretches out for one and a half miles, and can be divided into three sections, making it much easier to explore and conquer.

Marble Arch to Bond Street
The stretch of Oxford Street that runs from Marble Arch to Bond Street is considered to be the calmer end of the busy shopping street. Selfridges, which has been in business for over 100 years, is usually the highlight of this section, as it features collections from some of the hottest local and international brands, as well as concession boutiques and a basement packed with the most stylish of home accessories. Also situated on this strip of the street are a number of different high street brands, from New Look to River Island to Forever 21. It is also where visitors will find the cavernous Primark store, which offers 70,000 square feet of shopping bargains at unbelievable prices.

Bond Street to Oxford Circus
Between Bond Street and Oxford Circus is where you will find some of the hottest department stores in the city. First up is Debenhams, a store that is known for inviting top designers to create exclusive collections at affordable prices, and features everyone from House of Holland to Matthew Williamson. On the more luxurious end of the scale is House of Fraser, which has made a name for themselves by being the sole stockists for a number of the hottest labels. From Farell by Robbie Williams to the newly re-launched Biba collection, there are many one-of-a-kind pieces to be found at House of Fraser. John Lewis is another popular department store located on this section of the street and is considered to be one of the most respected stores in the country. With everything from fashion to electrics to homeware to furniture, John Lewis may offer a wide range of products, but its quality is always extremely consistent.

Oxford Circus to Tottenham Court Road
This stretch of Oxford Street is home to a number of different brands. While it may have another large Primark store, essentially earmarking the area to focus on cheaper fashion, there are still some worthwhile boutiques here worth a browse. American Apparel has been witnessing increasing success in recent years, while Nike Town is a four-storey store that focuses on sportswear clothing. For Italian lingerie at fantastic prices, head to Intimissimi, while Uniqlo is where you will find a great range of everyday basics. This section of Oxford Street is also home to a flagship Topshop store, which has such a broad selection of items on offer. The shop is split up into different sections, making it easy to navigate, from the Motel party dresses to the Freedom statement jewellery to the revolving door of micro-boutiques and pop-up stores that make a temporary home for themselves here.

Oxford Street will always be one of the most popular retail streets in the city, if not the entire country. This is largely due to the way in which the stores cater to such a diverse range of consumers, offering everything from discount shopping to the finest of luxury fashion.