Located in San Francisco’s Marina District, the San Francisco Palace of Fine Arts is an incredible monumental structure that was originally built in 1915, to house art exhibits for the Panama-Pacific Exposition. While it has been rebuilt and renovated over the years, the structure still boasts many historic features and makes for an extremely picturesque spot in the city, one that visitors always tend to flock to.

Architecture and History
It is the memorable architecture of the Palace of Fine Arts that makes the structure so iconic to the city of San Francisco, with Greek-style colonnades and a stunning Greco-Romanesque rotunda. The reason for this is due to the theme chosen by the original architect, whose design was inspired by Roman ruins and the “mortality of grandeur”. However, structures that were built for exhibitions, such as this structure for the Panama-Pacific Exposition, were only intended to be temporary, meaning that the original structure was created from short term materials such as wood and a burlap-fiber mixture. This led to the reconstruction of the Palace of Fine Arts in 1964, with architectural plans that duplicated the originals, replicating everything from the sculptural figures to the intricate ornamentation.

The Palace of Fine Arts Theater
One of the only original permanent parts of the Palace of Fine Arts was the crescent-shaped gallery space behind the rotunda, which was built with concrete walls in order to protect the valuable works of art that it housed. In 1970, once this space was restored, it became home to the Palace of Fine Arts Theater, which is still running today. The range of performances that you can watch here is spectacularly diverse, and you are bound to find something that appeals to you. Some of the upcoming shows include the full length classic production of Swan Lake by the Russian Grand Ballet, the World Famous Popovich Comedy Variety Show, which was voted as the best family show in Las Vegas, the 18th Annual San Francisco International Hip Hop Dancefest, and the Ultimate Beatles Tribute by the Fab Four. 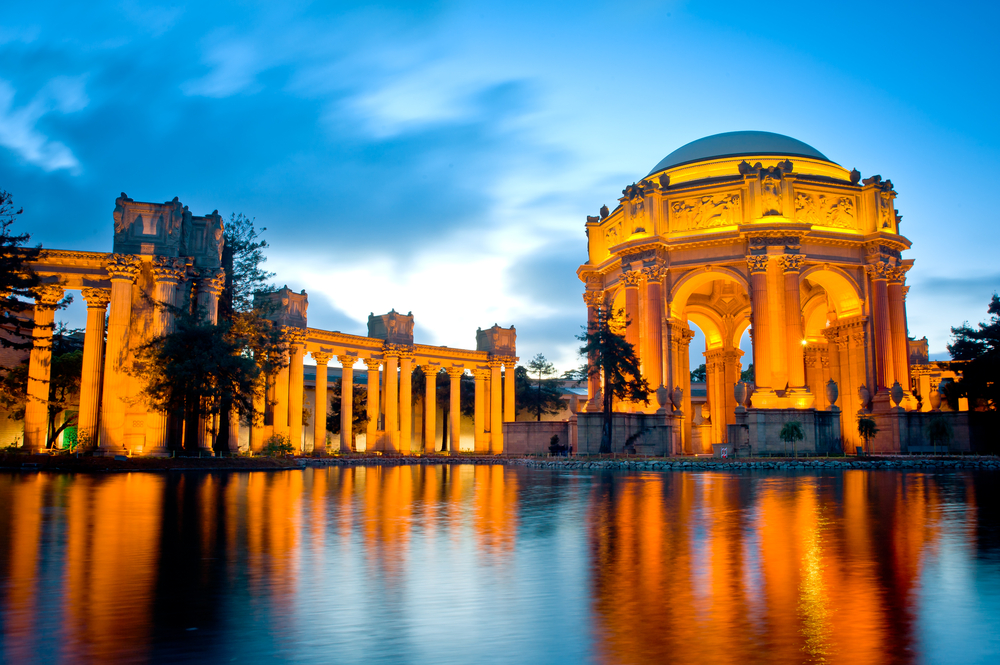 Innovation Hangar
Open throughout the year from Wednesday to Saturday, the Innovation Hangar is located in the Palace of Fine Art’s Exhibition Hall, and hosts inspiring exhibitions as well as hands-on educational activities. This cutting-edge space was created to bring the city’s thinkers together to come up with ideas under one roof, pushing the boundaries of innovation within San Francisco. Some of the most exciting current exhibits include 27 Steps: A Campaign for Peace, which was inspired by Nelson Mandela, Palace Games, and the Solar Car Project, which aims to create solar powered cars that can then race against other solar car teams.

One of San Francisco’s most photographed sights, the Palace of Fine Arts is a must-see for any first-time visitor to the city. Whether you simply browse the structure and its gorgeous lagoon, or spend the afternoon browsing the Innovation Hangar and then taking in a show at the Palace of Fine Arts Theater, it is no surprise that this site is one of San Francisco’s most popular attractions.