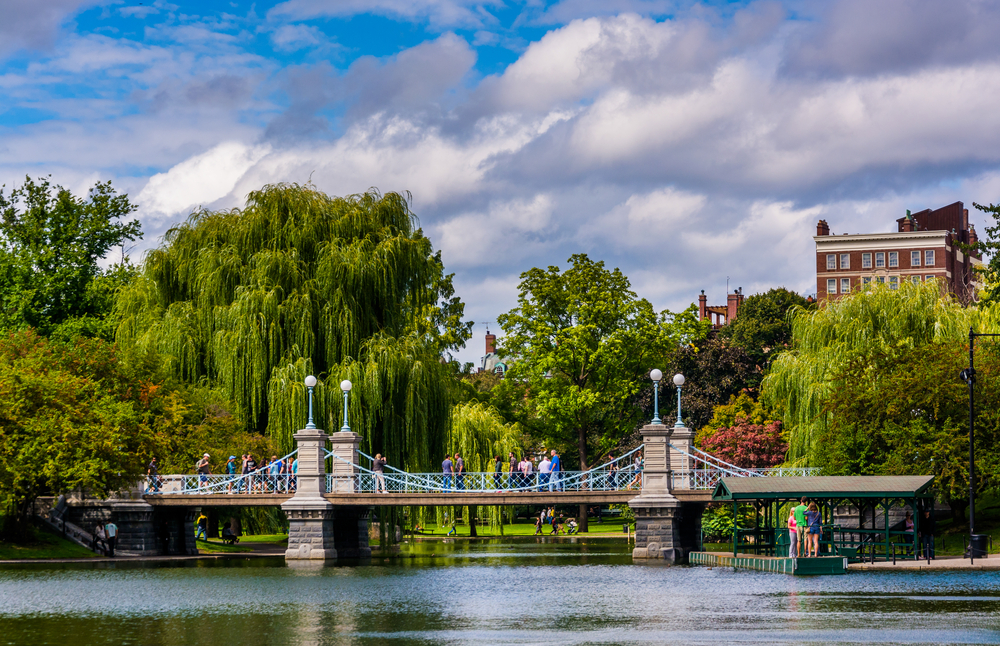 Situated in Boston, Massachusetts, adjacent to Boston Common, the Boston Public Garden was first established back in 1837, and over the years, turned an area that was once a salt marsh and garbage dump, into a beautiful expanse of lush greenery. The first public botanic garden in America, the Boston Public Garden is a tranquil oasis in the heart of Boston and has become an important and iconic part of the city itself.

Plants
Being a botanic garden, the range of plants that can be found at the Boston Public Garden is most definitely impressive. The garden is at its finest during the summer months, because even though the flower beds have been planted to be seasonal, the blooms are usually at their biggest and brightest during the warmer months. In addition to the tropical displays that make an appearance year after  year for educational purposes, there are plenty of roses, tulips and other gorgeous flowers to be seen. The 600 trees in the garden, of which there are over 100 different varieties, were planted in the nineteenth century, and have no matured to their full beauty, while newer specimens, most notably flowering ornamentals, have been planted in more recent years.

Swan Boats
The swan boats are considered to be the focal point of the Boston Public Garden, and were first introduced in 1877, to great success. The boats were inspired by the Richard Wagner opera Lohengrin, which featured the hero crossing a river in a boat that is being pulled by a swan, and then created by shipbuilder Robert Paget. The fleet currently consists of six boats, each capable of holding up to 20 passengers, with the oldest boat dating all the way back to 1918. The boats run from April to September, taking passengers on a 15-minute ride around the lake, and is a voyage that a number of stars have made over the years, from Shirley Temple to John Kennedy.

Public Art
The Boston Public Garden features a large amount of public art scattered around its grounds, adding to its quaint charm. The oldest monument in the park is the Ether Fountain, whose marble and granite structure dates back to 1868. The equestrian monument of George Washington is also iconic to the park and was unveiled in 1869, while the four bronze statues on granite pedestals were added in the early 1900’s. Other pieces worth taking a close look at include the Japanese lantern, which was a gift to the city from a renowned Japanese antique dealer, the Duckling Sculpture, which was based on 1941 bestseller Make Way for Ducklings, and the 9/11 Memorial, which was the most recent piece to be added to the park.

While Boston Common may be known for being busy and boisterous, the Boston Public Garden is loved for being the exact opposite. While it may have been a struggle over the years to keep the park in its pristine and serene state, these efforts have more than paid off, as the garden now holds a special place in the heart of many.