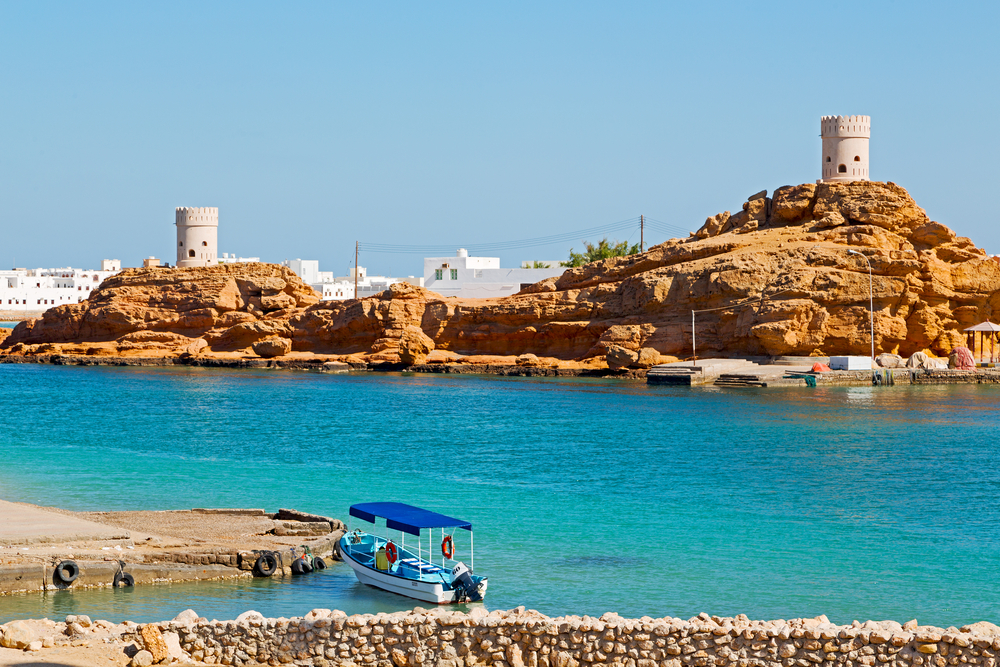 The capital of Oman and the largest city in the country, Muscat is actually made up of three smaller towns that have grown together over time. From the old fishing village of Matrah to the walled city of Muscat with its royal palaces, this is a region that is absolutely packed with history and culture.

Muscat
Out of the three towns, Muscat is the grandest, and is home to a number of Oman’s royal palaces and forts. The Al Jilali and Al Mirani Forts, which were built in the 16th century, are some of the most impressive, but, unfortunately, are not open for the public to tour. Just nearby from the forts is the Qasr Al Alam Royal Palace, which the forts used to guard, while the nearby Sultan Qaboos Grand Mosque is the third largest mosque in the world, and boasts a Swarovski chandelier, as well as a 21 tonne carpet. Muscat is also home to a number of museums, from the National Museum to the Omani Museum to the Natural History Museum, each of which will teach you so much about the region’s heritage and culture.

Matrah
The town of Matrah was once a fishing village, but is now famous for its Matrah Souk. This maze-like marketplace, which does also include a fish market as homage to the town’s past, is often referred to as one of the very best souks in the Gulf region, thanks to the incredible diversity of goods on display here. From traditional Omani handicrafts to local cuisine, you could easily spend quite a few hours browsing the souk. Once you are done exploring the souk, head to the Corniche area, which runs alongside the sea and offers up a relaxing, and beautiful, coastal walk. There are many restaurants dotted along the waterfront, as well as vendors selling sandwiches and the local tea, making this the perfect spot to stop for a rest and a bite to eat.

Ruwi
While the town of Ruwi may be considered to be the commercial center of Muscat, as well as the city’s main business district, it is still home to a number of old structures that attract tourists. Although several of these were demolished in the 70s to make way for commercial buildings, Ruwi still boasts an old world charm, and its winding narrow streets are always a joy to explore. Just like at Matrah, one of the highlights of Ruwi is the Old Ruwi Souk, where you will find a spectacular selection of local goods for sale. The Sultan’s Armed Forces Museum can also be found in Ruwi, and this is worth touring if you would like to know more about the region’s military history.

In order to really experience all that Muscat has to offer, it is essential to pay a visit to each of these three towns. However, this means that there are often quite large distances between areas of interest and the different attractions, so plenty of advance planning when it comes to transportation is necessary.